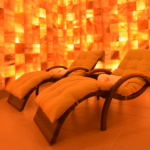 First of its kind in Malaysia, crystal salts imported from Himalaya are used as speleotherapy at our resort.

The natural crystal salt was formed millions of years ago in the Himalayan region as a result of the continental drift and the movement if the tectonic plates. The ancient oceans subsequently evaporated, leaving behind the gift of Himalayan crystal salt. The salt matured over millions of years under intense pressure together with the underground minerals, which ultimately formed the Himalayan crystal rock. This way the salt has zero exposure to toxins and impurities, and contain all 84 natural minerals and elements vital for human health.

Himalayan crystal salt release negative ions, which results in some very powerful benefits for the entire organism as following: